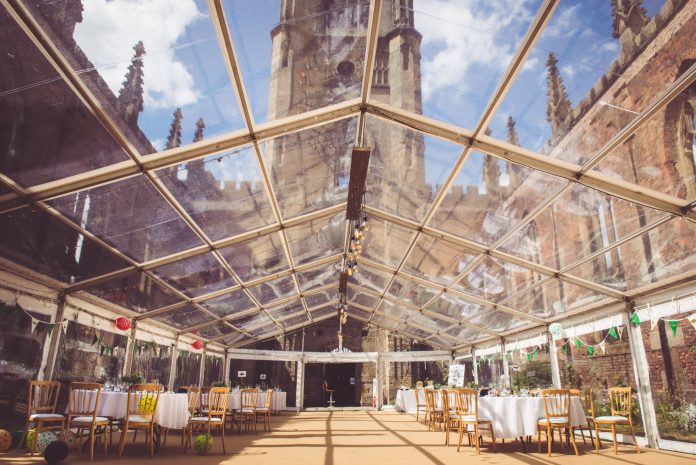 The inaugural new works festival Little LTF – which will be staged in just four weeks – will feature two LGBTQ-themed shows being premiered in Liverpool this Summer.

The two shows form part of a 14-strong programme of new productions which have been specially selected by a panel of industry experts. The announcement coincides with June being Pride Month 2021.

Little LTF will run for seven days between Monday 12 July and Sunday 18 July 2021. Audiences are reassured that the festival and programme will continue as planned, despite a delay in the lifting of remaining lockdown restrictions.

Little LTF is a new strand and sister event to the hugely successful Liverpool Theatre Festival, which was first staged last September in response to an ongoing need for live entertainment during Covid-19.

The outdoor festival at St Luke’s Bombed Out Church in Liverpool city centre was created by Liverpool theatre producer Bill Elms, who stepped in to bring entertainment back to audiences after theatres across the country were ordered to close their doors as part of the first Coronavirus lockdown in March 2020.

Shows flying the rainbow flag for the LGBTQ community are This Skin Of Mine and 12 – The Rainbow Monologues Live. Tickets are on sale now.

This Skin Of Mine is an outrageous dark comedy exploring the aspects of what it means to be Black and transgender, written and directed by award-winning creative Kai Jolley and artistic advisor Mzz Kimberley (Kim Tatum). Kim is a regular on the main stage at London Gay Pride, a judge for Pride’s Got Talent, and hosts Brighton Gay Pride. The cast features Eden Jodie and Janelle Thompson. It will be performed on Thursday 15 July at 6pm. Suitable for audiences aged 16 upwards. Tickets are £14.

This Skin Of Mine – estranged siblings Barry and Sarah immediately bare their acrylics ready for the attack but soon realise they have a lot more in common than they’d care to admit – and not just their bust size! Expect high heel shoes, broken nails, and plenty of wine. This outrageous dark comedy takes on hard-hitting themes head-on, including the difficulty of self-love, abuse, race, and transgender equality. Audiences will experience a wonderfully awkward world where comedy can be found in the darkest of places, while going on an enlightening journey of self-discovery, appreciation for family, and overcoming hardships.

Budding new talent Eden Jodie plays Sarah – a bold, intelligent and brash transgender woman, whose journey transitioning into a woman was only the first step in truly finding love for herself. Eden is a gender fluid independent artist currently studying at award-winning part-time drama school IDSA. The enthusiastic Janelle Thompson will play the role of Barry – a heartfelt, naive and emotional young woman, who wears her heart on her sleeve. Janelle, who is based in the North West, has more than 20 years industry experience working with Limehouse Films, Lancashire People’s Theatre, and Iron Pier Films to name a few.

Writer and producer Kai Jolley explained: “We are thrilled to be part of Little LTF and hope to make a lasting impact on an audience that thrives on dark humour. Liverpool is full of open-minded individuals who take the time to connect and listen to people’s stories, forward thinkers who like to laugh. We are thrilled to announce Mzz Kimberley, Eden, and Janelle, together we will be inspiring audiences while creating great entertainment.

“This Skin Of Mine is a fun and touching story focusing on the relationship between two siblings. Engaging the audience in a playful manner as the story explores race, transgender equality, and abuse. Some of the story extends from real-life events, growing up and being part of and witnessing some tragic and unfathomable events. Probably some of the most outrageous and crude moments reflect personal experiences and circumstances, things that only someone who has gone through them can write about. You’ll find it all in this exciting new piece.

This will be followed by 12 – The Rainbow Monologues Live, a new show of queer voices and stories that paint vivid pictures of what it means to be part of the rainbow family. Written by Kiefer Wes Williams, Tim Norman, Simon James, Seb Fontaine, Jay Jonsonn and Jack Bell, the show is produced by Henry Zirpolo and Grin Theatre Company, and directed by Dan Scott. The cast are announced as Pam Ashton, Alan Harbottle, Taylor Illingworth, Terence Conchie, and Holly Murphy. It will be performed on Sunday 18 July at 5pm. Suitable for audiences aged 18 and over. Tickets are £14.

Grin Theatre Company presents 12 – The Rainbow Monologues Live. The show is based on the highly successful social media hit series of LGBTQ monologues developed and curated during the last 18 months and has now been adapted for the stage. Hear and celebrate the stories – sometimes painful, sometimes joyful, but all saying so much about the human condition, highlighting the need to be heard, the need to belong, and the need to stand up and be proud. The monologues are self-contained and provide some tragic, some amusing windows into the lives of the 12 characters. Audiences will be taken on a rollercoaster of energy and emotion.

Kiefer Wes Williams, Artistic and Managing Director from Grin Theatre Company, added: “We are Liverpool’s longest running LGBTQ company, producing new works in Merseyside and across the North West for more than 10 years. We work with local actors, directors and writers to produce work spanning many important issues, and we have a mentoring system for all creatives. We are proud to represent our community and have our stories heard.

“We are excited to bring 12 – The Rainbow Monologues to the Little LTF stage this Summer. The show was originally developed as an online social media project during lockdown last year to give creatives the opportunity to still share their work. We had an incredible response and produced 65 monologues from more than 200 submitted pieces. We have now fully adapted a dozen for the stage, but making the final selection was a massive task. Join us at Little LTF to hear 12 exciting LGBTQ voices.”

The outdoor event will be staged within the church walls at St Luke’s Bombed Out Church, a new set-up different to the September festival, creating a more intimate, unique, covered Covid-secure performance space. The festival will adhere to all Covid-19 and Government guidelines required at the time.

Little LFT will be followed by the return of Liverpool Theatre Festival from Wednesday 1 September to Sunday 12 September 2021. The festival features more mainstream and established acts, artists, and productions. The line-up will be announced shortly.

Festival organisers have also launched the Friends of Liverpool Theatre Festival membership programme. The loyalty scheme will ensure that members become an integral role in helping the festival grow into one of the UK’s top arts festivals. Festival friends will be directly supporting the local arts scene and helping to maintain accessible, diverse, inclusive, affordable arts in Liverpool.